Like a ton of other little kids his age Hudson is obsessed with dinosaurs. So it was a definite theme for his 3rd birthday! We decided to do it at the WOW! Children’s Museum in Lafayette, CO – It’s small enough where we won’t be overwhelmed but the kids can still have tons to do and it’s large enough for us to hold all of our close friends and family. 🙂

Their prices were great for a 2 hour session (This was my first time doing an “outside of the house” party so I was excited it was affordable 😉 ) and they helped so much with the set up! Y’all know how thrifty I am so I decided to ask around my local Facebook Mom groups and found ALL of my dinosaur decorations for FREE. I was pretty proud considering it turned out looking uh-mazing!

The room was large enough for 20 people with space to spare and there TONS of tables for food, gifts, cake, etc.

Sprouts Farmers Market has the best catering platters!!! I grabbed 6: A veggie tray, a fruit tray, a sandwich tray, a dessert tray and a breakfast tray. They were all amazing, affordable for how much you got and they were a HIT. Anyone with any kind of food restrictions had plenty to eat which is obviously important to us as paleo eaters!

One of my favorite parts of this party planning was getting him a custom cake made by a local baker.. She does some AMAZING work and I’m SO happy I trusted her to make his cake! She made Hudson an AWESOME dinosaur cake and he LOVED it (Then she made this preggo Mama an INCREDIBLE carrot cake and omg it was gone in minutes haha!)

Her bakery is located in Broomfield, CO and has the CUTEST name! The Book Tree Bakery! Contact her if you’re ever looking for any baked goods – You’ll be amazed ❥

At the end of the party we passed out little goody bags with different dinosaurs printed on them and each kid/adult got their own healthy snacks to take home – And my favorites, of course! SunRype Fruit Strips and Made in Nature snacks!

Everyone had such a blast and most importantly so did my little three year old! Highly recommend ALL of these places and goodies to anyone hosting a birthday party in the Colorado area! (Or anywhere else 😉 )

(I was compensated for some of the aspects of this post, but all opinions are my own!)

Obvsies y’all know we’re a healthy eating family. I hate the idea of sending my kids to school or activities with a stomach full of processed gunk. We pack the healthy lunches with energy producing sides to make sure they don’t crash and can continue to thrive in school… Well what about when they get home? You’re exhausted from your day and your kids are bouncing off the walls.. 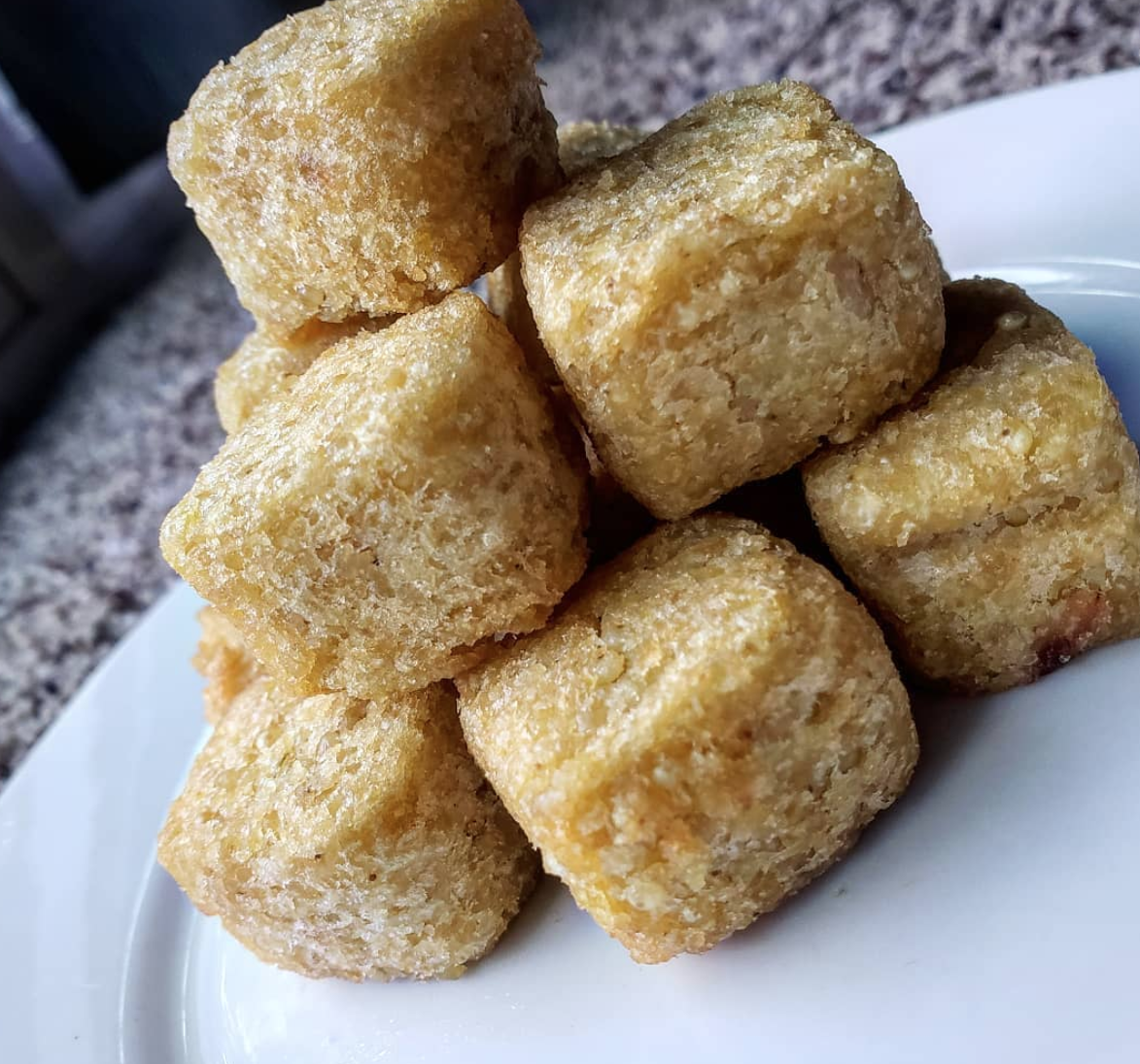 It can seem difficult to find the motivation to prepare a nutritional meal for your family but when there are options that are healthy and just as easy as processed foods then you’ve GOT to choose the healthy route – There’s not excuse at that point!

Currently, my favorite healthy side for my kids’ dinners are Rollin’ Greens’ Millet Tots!! They’re delicious tater tots made from only good ingredients and millet, an ancient grain! They taste delicious, take the same amount of time and are easypeasy! (And what don’t tots go with? 😛 ) 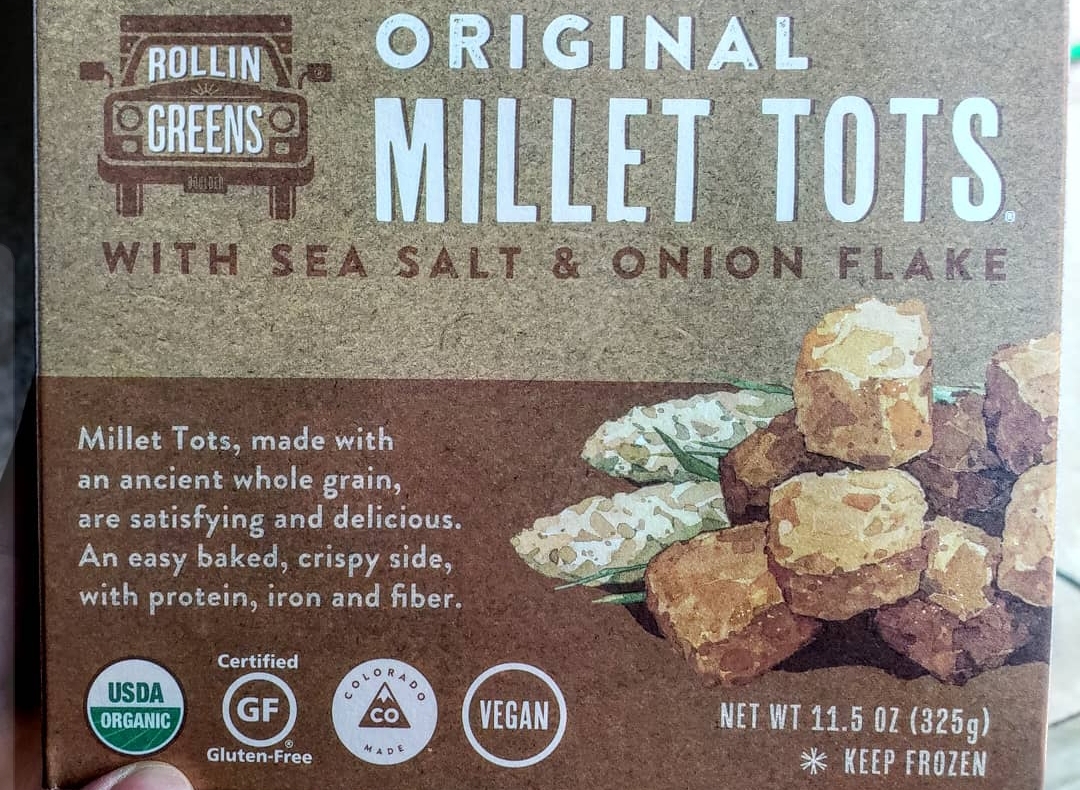 So if you’re looking for a delicious side alternative for lunches or dinners try the Rollin Greens’ tots! There are three delicious flavors so you can switch it up and see what they and you like best!

They’re available in the freezer aisle at your local Sprouts Farmers Market!

↓ They’ll be changing their packaging soon so be on the lookout for these beauts! ↓

As y’all already know – We’re big paleo eaters. It’s been amazing for our health but it can be a little challenging at times when cravings kick in. A big one in my family is waffles and pancakes. Hudson is obsessed with waffles and the kids always want pancakes on the weekends. However, I really hate using regular sugar and flour – So much bleach, gunk and chemicals, so I would take forever trying to make paleo pancakes and they’d only come out “okay”. 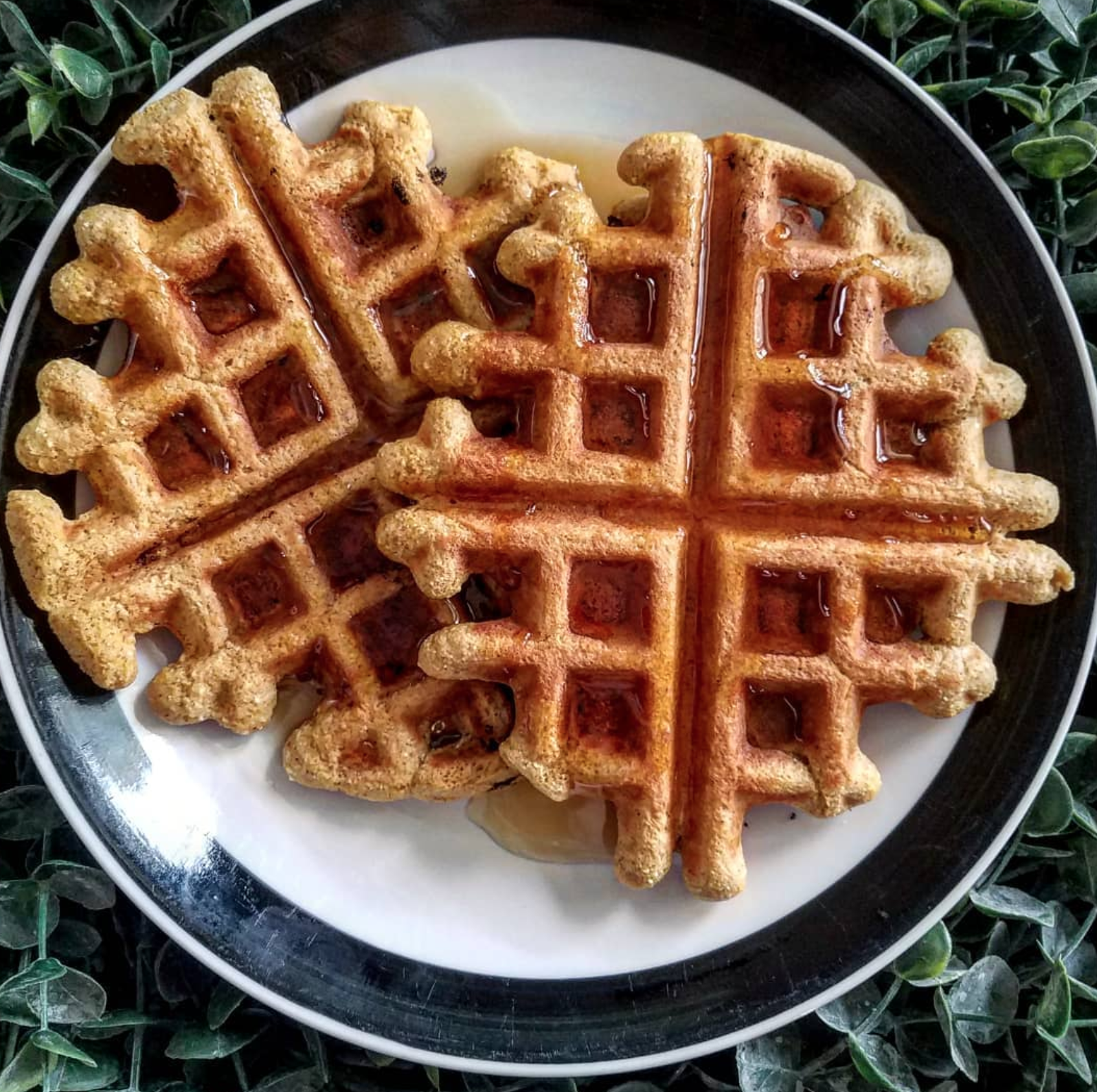 But when I stumbled across a Birch Benders’ Paleo Waffle/Pancake mix in Sprouts I was SO excited. “Only Add Water“ SO much easier than 20 minutes worth of trying to get the consistency and taste justtt right. 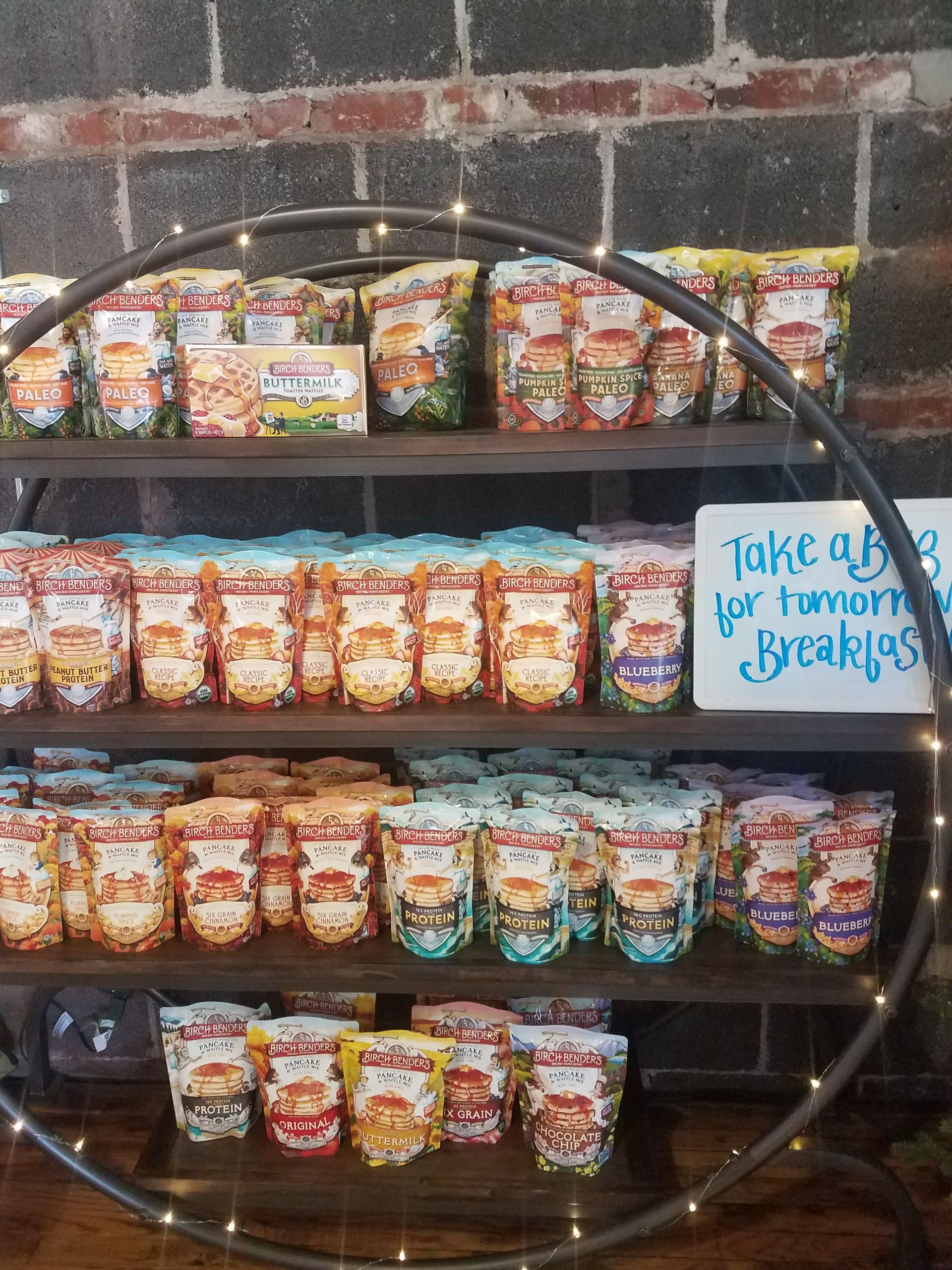 Well.. 2 years later and it is a staple in our home. That long being a customer and I happened to get an invite to an exclusive writer’s event thanks to Sprouts to Birch Bender’s Denver office!! I was literally giddy!

Once we got there we were greeted by the sweetest people ever – Their employees were so friendly, really passionate about their product and just happy with life (I would too if I worked for such a fun company!)

The event was hosted by Sprouts and as usual they supplied delicious meals and drinks! Thanks Sprouts, y’all are the best!

Now.. Something I hadn’t known (Not sure HOW) was that they had created some DELICIOUS new products – Frozen Waffles!! Even PALEO waffles which they had learned to make straight from master waffle makers in Belgium.. How amazing it that?! They were so dedicated to creating delicious and healthy waffles that they searched all over the world. That is a company I love to support!

Now I had a delicious, REALLY quick option for Hudson for breakfast since he’s obsessed with waffles! (And not just any kind… But specifically the frozen kind, because it’s an on-the-go-can-hold-it-while-I-am-rambunctious kind of waffle.. LOL) They taste just like a normal waffle but fill my children’s tummies with the good, wholesome ingredients they deserve.

Their theme for the event was Waffle Ice Cream Sandwiches. They had a whole bar set up ready with all their new waffle types, different ice cream options and toppings. It was so delicious and brilliant – Decided I am going to do this for Hudson’s birthday party in November at the Colorado Railroad Museum! It’s going to be SO fun, so you’ll be seeing more of these kinds of photos soon 😉

Birch Benders is such an amazing company – Not just because of their delicious products but because of their passion behind it. We’ve been their fans for 2 years now but this event has only exacerbated this.. We’ll forever be Birch Benderites and we’re so proud they’re in our gorgeous state!

Thanks Sprouts and Birch Benders for such an amazing experience!

As a paleo eater I love all things whole foods – Fruits, Meats and Veggies which are just so important for our bodies! The paleo lifestyle is based on caveman eating – Only things you would have found in nature (Obviously nothing artificial or processed). However, I don’t eat nearly as much meat as my Husband does so plant based eating has always intrigued me! So I went to a Sprouts Event where Dietitian Suzanne Farrell explained the benefits, methods and products that plant based eaters use (and why!)

It was so informative – I learned things I should be adding to my own diet to acquire certain vitamins/nutrients I may be lacking! Such as certain nuts (Almonds and Peanuts) that are amazing sources of protein, foods that provide Omega-3s if I’m not eating a ton of fish (Such as chia/flax seeds and spinach!) and so much more!

There were plant based products I never realized were paleo that were so tasty! (Like almond based hummus dip.. It’s SO good! Go to your local Sprouts and search around the hummus area – There are some great options for paleo snacking!)

I love Sprouts for their deals, their fresh foods and their products’ ingredients but most of all their tie to their communities. They’re always wanting to educate, help and assist everyone who’s wanting to learn about healthier eating! I love Sprouts!

I love living in Colorado – There are so many options for healthy eating in restaurants and so many local businesses that are known nationwide for their snacks/food. I’d heard of Made in Nature before so was very excited at the opportunity, thanks to Sprouts, to get to hang out in their test kitchen and try my hand at making my own Figgy Pops (Something they’ve MASTERED. Try them, they’re delicious!).

Their staff was so friendly and welcoming – The 10 of us bloggers felt instantly comfortable! And Sprouts was gracious enough to bring us a ton of food options for dinner.. I had their delicious vegan salad ❥

Their test kitchen was lined with delicious options for figgy pop making and we couldn’t wait to get working!

We began at station one with their pastes, they had Apricot, fig and dates. They were all so delicious so with both batches I made I used dates then added apricot to one and fig to another – Wish I could make these pastes at home, they were perfect!

Then we could add some dried fruit, dried nuts and anything else we wanted in our figgy pops! (They had so many options as you can see!) My first batch was made with date and apricot paste, dried mango, diced almonds and acai powder! My second was made with date and fig paste with cranberries, pistachios, almond butter and Himalayan sea salt! Wish y’all could try mine.. I’m pretty proud with how they turned out!

We found out we were the first outside people to come in and make our own figgy pops.. How exciting is that?! That’s why I love Colorado.. Amazing businesses like this that are 20 minutes away and we can do fun stuff like this! Such a treat. They treated us like family and we got to experiment with some fun ingredients and learn new tricks! I’ll be taking what I learned from this event to make figgy pops at home (My kids are already hooked.. I was so excited I let them have one for breakfast haha!!)

Thanks Sprouts and Made in Nature for such an unforgettable evening with good friends, good food and tons of fun!

Try their delicious healthy snacks for yourself! They’re available at Sprouts and on their website! Enjoy y’all! 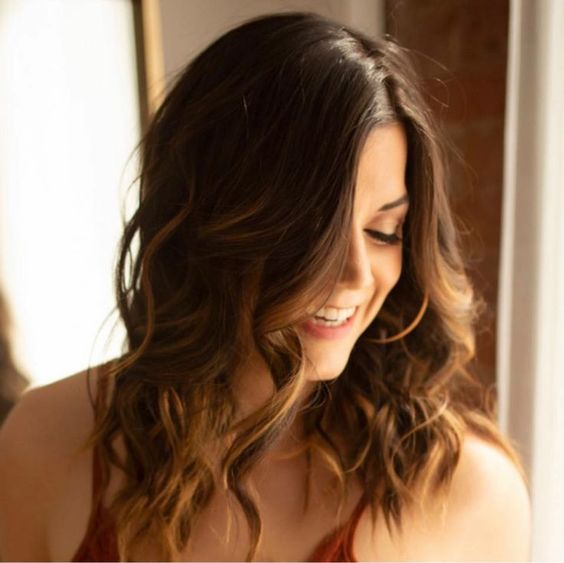